AR vs AK: Not This Again

Semi-auto military-style rifles are the most popular long gun in these United States, and there are a ton of arguments of AR vs AK as a platform for…well, whatever it is you have in mind for one. Many people have them for personal defense, as a home defense rifle or the myriad, mixed and multitudinous other scenarios in which a person might need this type of rifle.

We’re going to go over the relative merits of both, as well as their weaknesses. We won’t declare a real winner, because ultimately both are excellent rifles, but we will give you an idea of where one has an edge over another.

AR Vs AK: Reliability And Accuracy 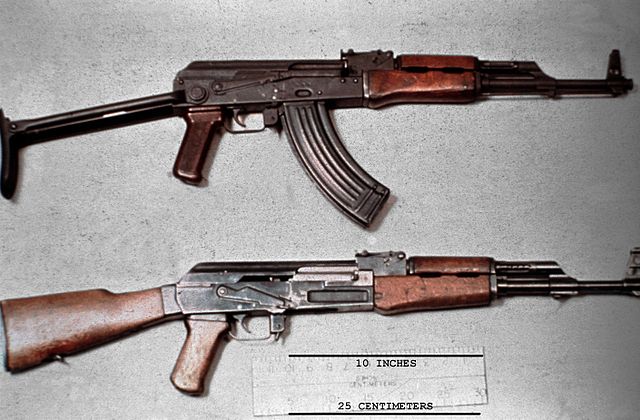 The AR-15’s gas system is simple – exhaust gases are routed from the barrel back to the chamber and blow the bolt back – but come with the caveat that you have to keep the AR-15 cleaned and well-lubricated for best results. If cared for, it’s a very reliable system but there can be some serious reliability issues when the person running the gun is an idiot.

Are you that guy who never cleans his guns? The AR-15 probably isn’t for you!

The AK-47/AKM platform, on the other hand, has tolerances that are looser than a Congressman’s morals. They’re known for running despite being caked in dirt, dunked in water, even dragged through the mud if the rifle is built right. However, that doesn’t mean you can neglect it without worries (it still needs to be kept clean and lubricated, ESPECIALLY if you shoot cheap surplus ammo!) but they are built to run in a wide range of conditions.

Are you that guy who never cleans his guns? Welcome to party, comrade. на здоро́вье

Accuracy…well, this is where things get a little weird.

The AR platform lends itself to greater potential accuracy, with a very well-built rifle, quality ammunition, the right optics and a skilled shooter, but not all AR platform rifles necessarily are. Rack-grade guns are typically 2 to 4 MOA, meaning a 2- to 4-inch group at 100 yards. Not bad, but hardly ready for the Wimbledon cup.

The AK platform…is actually quite misunderstood in this regard. An AK-platform rifle of good construction will typically deliver 3 to 4 MOA groups, bad ones closer to 6 MOA, with iron sights and surplus ammo. Add a good optic, and quality ammunition, and well-built AK’s can group tighter than 1.5 MOA at 100 yards.

Where this gets most people tripped up is that A.) people want a cheap AK, not a good one and B.) paying for quality ammunition, even 7.62x39mm, gets expensive real quick.

Good .223 ammo gets expensive as well, so don’t think the smaller cartridge does you any favors in that regard.

Gucci Guns: Building And Customizing An AR vs AK

If you wanted to build or spec out your AR or AK, both rifles have some ins and outs to know about.

The AR is easier to build on your own; the receiver just needs a bit of milling in most instances and everything else can be installed fairly easily. The AK is not easy to build from the ground up; setting the barrel and trunnion (the piece the barrel screws into) in the receiver requires some heavy equipment that isn’t easy or cheap to acquire.

What that also means is rebuilding or rebarreling an AR is pretty easy. On an AK, it’s hard.

Here’s the key difference between the two:

The AR-15’s barrel is attached to the gas block, fitting into it like a bushing and then secured in place by a barrel nut. Remove the barrel nut, and the barrel can be simply removed from the bushing. If you need or want to change the barrel, you really only need a vise and a wrench. (You’ll need a torque wrench for reinstallation.) Just about anybody can do it.

The AK family, on the other hand…is a little more complicated. The receiver is essentially stamped sheet metal that’s bent and riveted into a box shape. At the forward end is the barrel trunnion, basically a metal cylinder that’s pressed and pinned into the receiver, which the barrel screws into. Getting the barrel off requires the barrel and trunnion pin be pressed out. Doing so typically requires a 20-ton press, along with an AK barrel pin tool kit. They aren’t terrifically hard or expensive to get, but they take up a good amount of floor space and aren’t good for much besides pressing things, so it’s just going to sit there most of the time.

However, once the rifle is built (either by you or you buy a factory gun) it gets a bit easier.

Aside from the barrel, almost everything you can do with an AK in terms of accessorizing or upgrading can also be done with an AK as well, so the world’s your oyster. So long as you don’t have to do anything with the barrel of course.

AR vs AK For Home Defense

In terms of efficacy, AR vs AK for home defense is a stupid debate to have, because the standard .223 Remington/5.56mm NATO and 7.62x39mm are very effective at short range. But not everyone has a .223/5.56mm rifle for home defense; plenty of folks have moved to .300 Blackout and other calibers that can fit the AR-15.

Well, it’s basically the same story no matter what. The bullet is going to do its job.

Where people start to get concerned is the notion of overpenetration. Bullet go through bad guy, go somewhere else.

Any rifle or handgun caliber – and personal defense shotgun loads, for that matter – will go through multiple rooms without any problems. Rifle rounds will go through more of them, true, but the point here is that it doesn’t matter. Overpenetration is a potential problem no matter WHAT gun you pick up.

How you get around that is two-fold.

First, know your surroundings. Understand what’s a safe or safer direction to shoot in in the confines of your home.

Second, get some appropriate ammunition for home defense, so that a through-and-through is less of a potential hazard. When it comes to rifles, fragmenting or frangible rounds are the better choice for home defense, along with expanding ammunition such as hollow point or soft-point projectiles.

Look, folks: if it hits hard enough to poke a hole in a body, it’ll poke a hole through drywall. Rifle, shotgun, pistol, it doesn’t matter. Where you’re aiming it matters far more than anything else, but – again – make sure you choose an appropriate ammunition for home defense.

AR vs AK for hunting gets a bit complicated. AR-15 rifles are actually offered in a number of chamberings, from .223 Remington all the way up to .458 SOCOM. So long as it fits in the mini-action, it can be used, including a few AR’s made in 7.62x39mm.

AK’s, on the other hand, are mostly offered in 7.62x39mm. There are some 5.45mm AK-74 rifles that are on the market, but limited ammunition, and also some AKs offered in pistol calibers as PCCs. There are also some AK’s chambered in .223/5.56mm.

Here’s where things get complicated.

At relatively close range – meaning inside 200 yards, which is where most deer or hog hunting takes place – both rifles are capable in their typical chamberings though 7.62x39mm packs a little more punch, which is desirable for putting game down quickly.

Then again, .300 Blackout pretty much replicates 7.62x39mm performance in that regard at that range. Also, AR-platform rifles are offered in straight-wall cartridges such as .350 Legend and .450 Bushmaster, which the AK is not, and that matters in some parts of the country.

An AR-10 is perfect; .308 Winchester/7.62mm NATO is excellent for big game hunting and 6.5mm Creedmoor is quite capable as well. However, .223/5.56mm, .300 Blackout, and 7.62x39mm lose too much energy at longer range, which means that these rifles aren’t very good for hunting in about half of the continental US. You can get a little more legs on 6.8 SPC, but it starts to falter past 300 yards compared to full-power rifle cartridges.

So, both work at moderate range, but aren’t great at long range.

AR vs AK When Stuff Hits The Fan

In reality, “AR vs AK” in some sort of post-apocalyptic scenario…is actually ridiculous.

The truth is that if something so disastrous occurs that federal, state and local governments irretrievably break down…frankly, you’re not going to be doing much shooting.

For one, the game animals will die off pretty quickly. Anticipate getting into gun battles with roving gangs of…whomever? You probably aren’t going to live very long. If something bad enough happens to induce a total breakdown of government and society, millions if not billions of people will be dead or dying fairly soon into the process, and there’s a good chance you’ll be among them.

A lot of people seem to have these fantasies about end-of-the-world scenarios. Maybe it’s because they watched too much of “The Walking Dead.” Not that natural disasters can’t occur, of course, but if you remember what happened in and around Hurricane Katrina, order was restored in a couple of weeks. Societal breakdowns can occur – look at the LA riots in the 90s – but again, it barely lasted a week or two.

In reality, a pressure canner and a water filtration system will get you a lot farther.

Source
AR vs AK For Home Defense And Other Purposes is written by for gunbelts.com

Lessons From The Pros On Trigger Control

Why Use Mylar Bags For Food Storage