Do People Put Too Much Stock In Military Service Pistols? A Modest Proposal

Bought A Handgun Because The Army Uses It? That Might Not Mean What You Think It Does…

A lot of people will buy a particular make and model of handgun because it’s used as a military service pistol. Therefore it has to be good…right?

It’s not the worst idea in the world and that has, to be sure, sold a lot of guns. People went absolutely NUTS over the Sig P320. A lot of people buy Glocks because it’s what cops and spec ops guys use, the boomers love the 1911 (muh two world wars!) and so on.

Obviously, if the gun is good enough for professionals, that means it has to be trustworthy, reliable and accurate and so on, right?

Let us, however, throw a bit of cold water on the idea.

It isn’t that your Sig P320, or Beretta 92 or 1911 (muh two world wars!) is bad or not capable of saving your life if it comes to it. It’s more that the laity can have some very unrealistic ideas, and that’s what we’re going to address here.

If you want an idea of how well military service pistols are typically regarded, the M1 Carbine of the US armed forces and the AK-74U from the Soviet military give you a good idea.

To explain that: both of those weapons are intermediate firearms, meaning they aren’t full-meal-deal infantry weapons but they are both much more powerful than a handgun.

The former is chambered for .30 Carbine, a small rifle cartridge (based on the .32 Winchester Self-Loading) that tends to produce just under 2,000 fps of velocity and 1,000 ft-lbs of energy at the muzzle with the M1’s 18-inch barrel.

The latter is classically chambered in 5.45x39mm, the USSR’s (and now Russia’s) standard service cartridge after replacing 7.62x39mm. The 8.1-inch barrel reduces typical muzzle velocity to around 2400 fps and less than 800 ft-lbs of energy.

Both are known for having an effective range of about 300 meters or less, far less than the typical handgun in real-world conditions.

Now, why does this matter?

Handguns take a lot of time and practice to get competent with. Shouldered weapons take a lot less, both in terms of ergonomics and the longer sight radius, and both of these firearms are shouldered.

Both of these firearms were also developed for the same purpose: give non-infantry but front-line personnel a means of defense if attacked that would be effective against enemy personnel at typical combat distances, and are easier to deal with than a standard rifle.

Both the AK-74U and M1 Carbine are smaller and lighter than standard infantry rifles and more portable. Both weigh 6 lbs or less (the M1 comes in at a hair over 5 lbs) and neither produces much recoil, less than 5 ft-lbs of recoil energy.

Now, let’s put something else into perspective. The US Army ordered more than 6 million M1 Carbines around the time of World War II, but only about 2 million M1911A1 pistols.

In other words, the world’s militaries created light, compact long guns for use as personal defense weapons because they’re more effective and easier to use than pistols. By waxing too lyrical about the military lineage of a pistol, you’re arguing the merits of a firearm that was considered inferior by the users.

Another thing to bear in mind about military service pistols is the procurement process, because it’s a whole lot different than you going into a gun store.

Governments buy in bulk, and large militaries will usually get a number of bids from various manufacturers, along with tests to see which guns come out on top according to the testing criteria.

When the military selected the M9, the Sig P226 had performed slightly better in testing but – as you can read direct from the GAO report, the clincher was Sig Sauer was going to charge $3 million more, mostly for parts and magazines.

The XM17 trials were won by Sig Sauer in much the same fashion. Learning from their previous experience (they were a little bitter about it!) Sig Sauer knew the price tag would probably clinch it for them.

And clinch it, they did. The P320 was slightly outperformed by the Glock pistol in some testing, but – as you can also read direct from the GAO, Glock was also asking for $103 million more than Sig.

Sig Sauer also makes ammunition, meaning they cost less and were a one-stop-shop for guns and ammo.

What does this mean?

Governments buy stuff both because it’s good, but also because of the price tag. They don’t buy “best;” they buy “good enough at the lowest cost.”

Just because your handgun is an army handgun for…anyone…doesn’t mean it’s anything special. The Russians were issuing Makarovs for a really long time, and the DA trigger pull will give you arthritis.

It’s the equivalent of someone buying a Toyota Corolla and bragging about it. Congratulations; you bought one of the most mass-produced vehicles on the planet. What…an…accomplishment.

Put another way, you know how some gun snobs make fun of people for buying a Taurus? The reasons for buying one (they work and they’re cheap) are the reasons why militaries select service guns.

Furthermore, you know what the most proven service pistol of all time is?

It’s the Smith and Wesson Model 10, a .38 Special revolver. It was issued by the US Air Force, dozens of militaries and thousands of police departments worldwide. Introduced in 1898, it’s literally the most issued and proven combat pistol ever made…but to the modern handgunner, it’s a dinosaur. 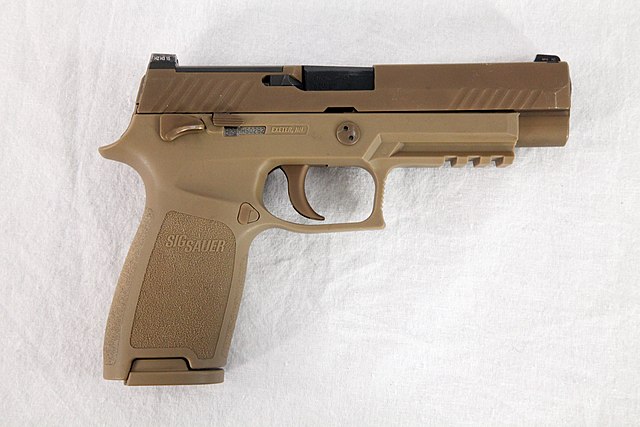 This isn’t to say that you bought a turd because you bought a gun wholly or in part because it’s a military service pistol. This is instead to say that a lot of people put more stock in some products than maybe they should and sometimes they do so for reasons that aren’t necessarily the most thought-out.

Point being, just because an exemplar of…whatever it is that you’re into…uses something doesn’t necessarily mean it’s the “best” of anything. Musical instruments, tools, cars, guns or what have you.

Think of it this way. Rob Leatham can outshoot almost anyone on the planet with an XDM. He’s known for running the stock model, with no real modifications to speak of. He also shoots 1911 pistols from the Springfield Custom Shop, handmade 1911s.

The point here is that you’re only going to shoot well if you are good at shooting. What gun you do it with…doesn’t really matter as much as some people think.

Does this mean that a Sig Sauer P320 is a bad gun? No, it’s not, and it’s definitely good enough for the US armed forces to bet their life on it, but there are plenty of other firearms that are literally just as good and just as reliable and accurate out there as well.

Is the Beretta M9/92FS better than so many other Wonder Nines of the era? It has some excellent design features, to be sure, but the S&W Model 59 family did too. So does the CZ 75 and so does the Sig P226.

The 1911 platform CAN be very, very good, but you have to start with a good example to begin with and it requires more care on the part of the owner than many modern shooters are willing or able to do.

And so on. Just because there’s military pedigree doesn’t mean a gun is necessarily the “best” or even that much to write home about.

Source
Do People Put Too Much Stock In Military Service Pistols? A Modest Proposal is written by for gunbelts.com

What to Put in a Survival Kit