The Sturmgewehr 44 was developed towards the end of World War II by the German military. The idea was to replace the submachine gun and the K98 at the same time, especially for paratroopers but also to create a better all-purpose service rifle.

The long-range capability of the K98 wasn’t needed for most engagements and having submachine gun capability equipped more troops for CQB. This augments the capability of troops in the field; effective at both traditional and close combat distances.

At the end of the Second World War, a young Russian tinkerer was inspired by the StG 44, and started working on a rifle design that was simple, rugged and would give the soldier the same capabilities of efficacy at CQB and traditional combat ranges, using a newly developed intermediate cartridge.

If you haven’t already guessed, the man was Mikhail Kalashnikov and the rifle became the AK-47. obviously, the AK-47 and the StG 44 weren’t inspired by the M1 Carbine at all, but it is the case that people were arriving at the same ideas independently, proving the concepts albeit for a different purpose.

Obviously, the M1 Carbine wasn’t originally select-fire capable (the M2 Carbine was, though!) but what does it have in common with the StG 44 and the AK-47?

Lighter in weight, and shorter in length than a traditional battle rifle. Detachable box magazines for faster reloading and greater onboard capacity. An intermediate cartridge that was effective at typical combat distances and lighter in recoil, meaning it’s easier to make hits.

Again, the M1 Carbine was more of a personal defense weapon (PDW) than an assault rifle, which is what the AK-47 and StG-44 are…but it’s also that the assault rifle concept itself involves most of the ideas that informed the M1 Carbine.

And it didn’t stop there.

By the early 1960s, Colt began experimenting with shorter barrels on the M16. This led to the Colt 605 (the Dissipator model) and CAR 15/Colt Carbine/XM177/GAU-5 family of rifles, issued to Navy SEALs and SOG operators in the Vietnam war.

Handier, lighter, effective at realistic distances with a light-recoiling cartridge and at close quarters.

Put it a little differently, the M1 Carbine, developed just before the United States entered World War II, introduced the idea that a light, handy rifle that didn’t kick like hell (an M1 Garand produces around 5 times the recoil energy) is better than a heavy rifle that does.

The Modern Service Rifle: Barely Removed From An M1 Carbine 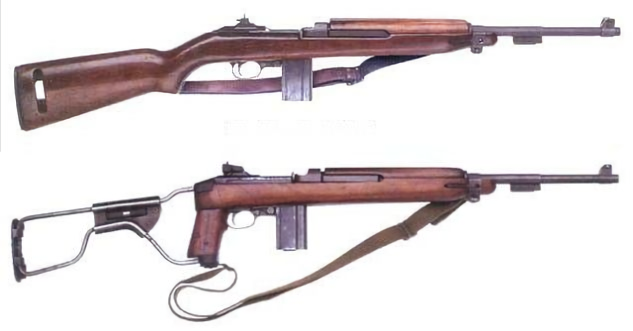 Consider the modern service rifles on the market. Almost all descend from the same ideas behind the M1 Carbine.

And yes, that includes the bullpups.

The M4 carbine has the same ideas at the core of the rifle. Intermediate caliber, more compact than the M16, adept at typical combat distances as well as close quarters use.

If you think about it, how far is it from an M1 or M2 carbine at a conceptual level? Not much, though it differs greatly mechanically and in some design details, but the ideas are almost the same.

What about the bullpups?

Well, the entire idea behind a bullpup such as the SA80, AUG, Tavor or FAMAS is to essentially arrive at the same place – effective at CQB and longer range – but just favors close quarters in how the equation is balanced.

Granted, the needs of the modern warfighter as well as the available tech have changed modern rifle design. The need for more attachments, and use of optics instead of iron sights are significant developments.

Not that you can’t modernize an M1. Ultimak and other companies make some rail systems that allow for use of attachments. You can absolutely find a way to mount a red dot and a flashlight without going Full Bubba.

However, the point remains: the M1 Carbine, or at least the ideas behind it, changed the nature of the service rifle. In those terms, the old junior varsity warhorse is barely behind the curve of the modern service rifle.

Source
How The M1 Carbine Changed The Service Rifle is written by for gunbelts.com

5 Best Remington Guns Since They May Not Be Around Forever

Has Tactical Gear Gotten Out Of Hand?

Does A Full Handgun Grip Matter For Concealed Carry?